Spent the weekend installing Windows 8.1 on my two //BUILD/ machines, a Surface Pro and the Acer Iconia W3-810 they gave out at the Microsoft Developer Conference in San Francisco in June.

I did a clean install of both machines, using a USB.  Extracted the Windows 8.1 RTM ISO from MSDN to a USB thumb drive (the one they gave at //BUILD/ reformatted.)  The Surface went very smoothly.

The Acer, less so.  The first thing you need to do is download the Windows 8.1 32 bit ISO to disk and extract it to the USB.  Then, to boot the Acer from the USB, you needed to hold the Windows button (physical button on the front of the Acer tablet) and the power button at the same time.  This booted into a special mode that allowed me to see the USB.  Then I was able to run the install.  After running a full installation, I couldn’t get any access to the network using WiFi, thus I couldn’t download any additional drivers.  Finally, I found that  I needed to install a driver packet from Acer support.  Here is the link if you have a similar Acer tablet. 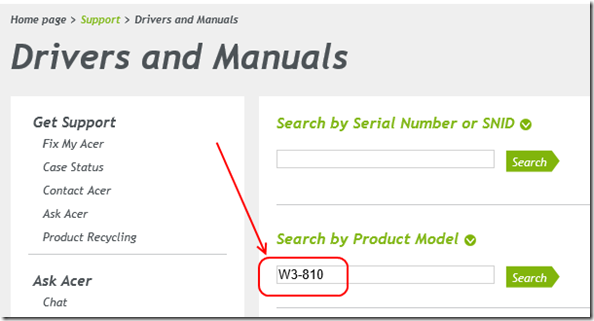 Then after pressing the search button, scroll to the bottom of the screen and you will see the download link:

This is a single installation which makes all the components work.  All the drivers are included in this one installation.  Once activated, the Windows 8.1 RTM runs beutifully on this machine.

Now I found that because this Acer has minimal storage, you need to run Disk Cleanup to remove the Windows.old file an release multiple GB of storage back.  I didn’t save anything, and reinstalled all my applications, including Office 2013 Professional.

After having great success getting those two machines happy: the Surface Pro running Windows 8.1 Pro 64 bit and the Acer running Windows 8.1 Pro 32 bit, I decided to upgrade my Dell Precision M6500 mobile workstation from Windows 8 Enterprise to 8.1.  The upgrade took a very long time.  I had a few glitches with the machine not properly shutting down.  But I finally got it to boot back up, but was unable to activate it.  Then I remembered with Enterprise you need to use a command line tool to activate.  So here are the steps I used for activating Windows 8.1 Enterprise 64 bit.

First of all, get a Enterprise Key from your MSDN account.  Then open a command prompt as Admin (right click the Windows Start button and choose “Command Prompt (Admin)” 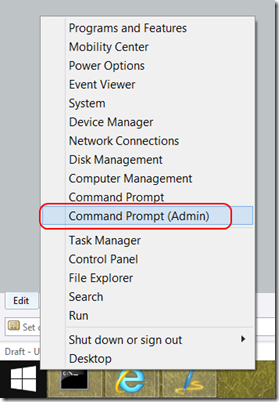 Then navigate to the C:\Windows\system32 directory and run the following command:

That will install the key but won’t activate Windows.  Next to activate simply use the following command:

Then I was good to go!  Now I have three machines running different variations of Windows 8.1.  I like it much better than Windows 8.  The differences are subtle, such as using the same wallpaper for the start screen as the desktop.

After upgrading my Dell M6500, I found that there were some text on my ViewSonic VX2739 1080p 27” monitor that was showing up small and blury.  Also, when I launched VMware 9, not only did I get an incompatability warning, but the resolution came up with 2560 x 1920 instead of the native resolution of 1920 x 1080.  Notthing I did in the VMware settings would fix it.  I thought, maybe I’ll have to upgrade to VMware 10.  But I found this blog post that fixed everything:

Basically, you need to tweak the new DPI Scaling system.  Thanks to Vishal Gupta for posting this fix.